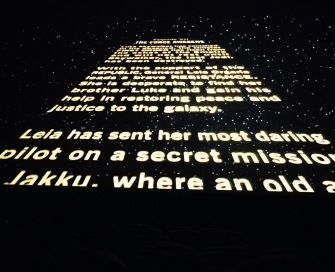 Stay with me while I work this out.

Watching the new Star Wars movie with my husband and kids this weekend was a mess of long lines, popcorn and sticky booster seats. Kids having imaginary light-saber duels in the lobby nearly knocked me over. Aggravating, yes but exciting to see everyone so…excited.

I didn’t realize until I was standing in line with 150 other people how much of a geek I was about the whole thing. I also didn’t realize until my kids were hopping around in the standstill line, begging to go in already, how lucky I am to have kids that have nostalgia in their little 8- and 10-year old bones.

So in we went at last, and I confess I took a phone pic of the iconic scrolling recap for what reason I have no idea—sometimes we do spastic things when we are geeking out. Anyway, here’s the thing: in a perfect storm of childhood indoctrination, this movie manages to be both (yes) derivative and forward thinking at the same exact time. The same storyline as A New Hope, it is a whole lot of in-jokes and old fashioned Han Solo snark. But it is also something else entirely. A cast so bright with color and estrogen, I felt my heart racing from the first glimpse of Rey, a dewy, capable, young hero with fight in her every step.

To be fair, the Star Wars franchise started out this way—Princess Leia for all her snakes and bikini wearing, has always been a fierce female lead. And true to the torch-passing themes laid out in this chapter, our new girl utters a sentence strangely close to but with far less flirtation than the “Aren’t you a little short for a storm trooper?” of her forebear when new guy Finn makes a feeble attempt at machismo rescue upon meeting her. Strong women abound this time around—not just Rey, who is Leia, Luke and Katniss Everdeen, wrapped into one fiery ball of can-do, but others too. Maz Kanata is played to perfection by Lupita Nyong’o, high-ranking Captain Phasma is played by Gwendolyn Christie, Dr. Kalonia, the rebel doctor is played by Harriet Walter, and the rebel fighter pilots themselves are a veritable Benetton ad of gender and race. And Finn, our new accidental hero and possible love interest for Rey, is a young Black man interested mostly in escaping a system too brutal for him to bear. It’s perfect.

To contrast all of this light and optimism is of course the Dark Side, or the First Order, which is as fascist a regime as any in Star Wars (or human) history, complete with swastika-derived imagery and a Nazi nod to ye old Seig Heil posture and salute.

The whole thing is just a blast honestly. And while my racing heart had lots to do with the action and the stakes, it also had to do with the profiles of my own two kids as the screen lit them up with adventure and possibility. This is how messaging gets entrenched in young minds—when enthusiasm meets values-explicit commercialism. (See: Frozen, for example. Props where props are due, friends.) But it occurred to me, possibly when Kylo Ren pulled off his mask and revealed himself to be hipster actor, Adam Driver, that the last time I felt this riled up about something that had set out mainly to entertain me, was this past summer when—two days before it became the most hyped Broadway show in history—I saw Hamilton in its final night of previews.

Now, if I were a real Star Wars nerd I might have known that Adam Driver was going to be our new Darth Vader, but as established, I am a poser—making only fleeting references to the Star Wars of old with a Leia’s bikini reference and zero nuance. I’m okay with this. So back to Adam Driver. The night I saw Hamilton, Kylo Ren sat in my row. In his baseball cap, he was more Lena Dunham’s Brooklyn, than George Lucas’s galaxy far, far, away, but still—you see the connection. He and I were at Hamilton together. And together, we watched as Lin-Manuel Miranda’s production took aim at everything we know to be true about our founding fathers. What he did—we all know by now—is lay a Millennial filter on top of a musty old picture. In a post-racial, post-gender, post-everything explosion of talent and rigorous story and truth telling, Burr is black, Jefferson is black, Hamilton is Puerto Rican, the women have things to say, and the dancers are yup, a veritable Benetton ad of gender and race.

And it’s derivative and forward-looking at once. Telling an old story through a new lens, lighting us up with new ideas and new ways of thinking about old themes, our trusty forefathers becoming complicated and brilliant and flawed right before our eyes. Fighting against a controlling empire that is interested mostly in power and acquisition and eventual manifest destiny, they are the Resistance, rebels seeking justice and order and a workable financial system.

Here we go: it all ends in a duel in Weehawken, but on that stage, those guns might as well have been light-sabers, because there was a mess of light and dark in play and it all gets a little hazy because it’s fluid. All set to dense and precise rap and hip-hop lyrics heavy on Run DMC and Eminem influence, it is Yo MTV Raps meets Les Miserable meets ahem—Star Wars. Likewise, the entire cast of The Force Awakens could have broken out into Hamilton’s “My Shot” (…you’ve got to be carefully taught) and it wouldn’t have seemed wrong. Different, but not philosophically wrong. Orphans Hamilton, the Skywalker twins, Rey, Finn—all on a journey, looking for a legacy.

What is right and what is wrong, where we were and where we’re going next, what things once looked like and what they look like now. That is what it means to be current. And that is what we mean when we say Millennial—it isn’t all hipsters and craft beer. It is nodding to the past, living in the present, and planning for the future at once. Not understanding this is what makes Donald Trump look old and irrelevant (blustery and funny but not as charming as Hamilton’s King George as played by the pitch-perfect Jonathon Groff) not just to the Millennials but to me, and to my own kids. Because, their nostalgia notwithstanding, any kid who sees The Force Awakens isn’t looking for a Trump, she’s looking for a Rey or a Finn, or a Maz Kanata for that matter.

My new hope, sitting here writing this, is that I am not the only crossover audience for these stories of scrappy game-changers, stories of awakening both, forces both. My hope is that there are more of us on board this rickety Millennium Falcon.

See what I did there?

(How to Make) Tin-Can Stilts

(on writing + other distractions)

(on writing + other distractions)

Read it and Eat